I was finally comfortable developing for android with eclipse but then Google rolled out the stable version of Android studio and ended support for eclipse so I had to switch to android studio and I was introduced to the world of Gradle. Yes, it was and still is frustrating for me to use gradle but it does have it’s fair share of advantages that you will definitely understand after finishing you first project with android studio. Here are few pointers about gradle and how you can use the offline mode, so no need to bang you head on the wall,  you will start understanding it gradually by using it, not just by studying the documentation.

When you create a new project, go to file->settings->build, execution, deployment->build tools->gradle. Make sure you keep the use default gradle wrapper selected unless you have very specific and have requirements to use your own Gradle build. You can select offline mode too, i will talk about it in the end of this post. There is a default Gradle distribution that is already shipped and linked up in your project, so that you do not need to separately go ahead and download Gradle and set it up. 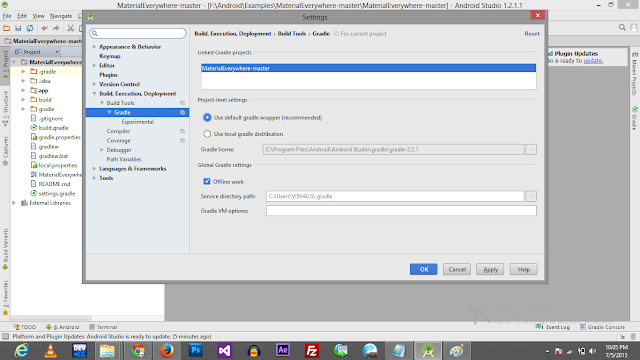 First let’s take an overview of what’s in the android gradle file. Go to  /project/app/build.gradle.
You will see something like this-

From top to bottom lets see what each property should be-

This should not be higher than the highest SDK version you have installed via SDK Manager.  You can check the SDK Manager, look for platform entries and check the API and the Status.

This should be the same as your compileSdkVersion. Just like in eclipse.

All the support libraries are identified / referenced here.

Example:
compile ‘com.android.support:appcompat-v7:21.0.0’
A version suffix is used to identify the support library, which comes after the colon (21.0.0 in above example). Note that, this specifies the version of the support library, not the SDK version. Generally you should use the latest unless you specifically need to use previous versions of methods/functions in older support library revisions.
In your SDK Manager, jmake sure you have Support Repository installed.

When importing someone else’s project, there will mostly be sync problems, Corret the version numbers and other properties in build.gradle and Android Studio will request you Sync again. And hopefully your errors will be fixed.